An Encouraging Word is a bi-weekly article written by Tom Cash, First Church of Christ’s Senior Minister, and published in the Sunday edition of the Sault Evening News. A list of past articles is available at the end of this most recent “An Encouraging Word.”

Ignorance Is Not Bliss 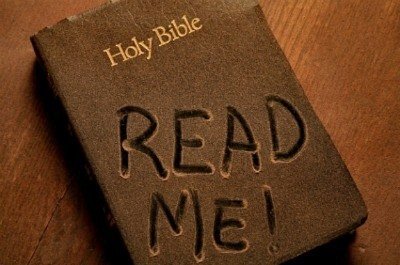 We are rapidly becoming a people who are completely ignorant of God and His Word. Some years ago my wife and I went to a movie theater. We were in a university town, and some college students sat behind us. Before the trailers for upcoming films came on the screen, a video containing contemporary trivia was shown. One segment talked about actor Noah Wyle, who at that time played a lead role in the TV series “ER.” They mentioned that Wyle collected arks. We could hear one of the students ask, “Arks? What are arks?”

Another tried to explain. “You know, boats. Like in Noah and the ark.”

His response dumbfounded me. “I have no idea what you’re talking about.” And he didn’t.

I have also noticed that any topic dealing with the Bible is largely avoided by contestants on the TV game show “Jeopardy.” When forced to select the topic, many do not respond to the answer or are completely out in left field.

It was not all that long ago that Americans had a profound respect for the Scriptures. In a matter of a few decades, we have wandered far from our roots. Consider what some former presidents wrote about the importance and the place of the Bible:

“It is impossible to rightly govern the world without God and the Bible.” – George Washington

“The Bible is the rock on which our Republic rests.” – Andrew Jackson

“I am busily engaged in the study of the Bible. I believe it is God’s word because it finds me where I am.” – Abraham Lincoln

“To the influence of this Book (the Bible) we are indebted for the progress made in civilization, and to this we must look as our guide in the future.” – Ulysses S. Grant

Inside a canvas-covered WWI Bible given to all military personnel are these words: “When you have read the Bible, you know it is the word of God, because it is the key to your heart, your own happiness, and your own duty.” – Woodrow Wilson

And inside a WWII Bible, also distributed to all service men and women, Franklin D. Roosevelt wrote the following: “As Commander-in-Chief, I take pleasure in commending the reading of the Bible to all who serve in the armed forces of the United States… It is a fountain of strength and now, as always, an aid in attaining the highest aspirations of the human soul.”

“No educated person can afford to be ignorant of the Bible.” And yet as a whole, we are. We think we know what it says. Others tell us what it says. But we really do not know what Scripture says unless we read and digest it for ourselves.

C.S. Lewis was a nonbeliever who tried to debunk Christianity. Instead, he became one of the 20th century’s best defenders of the faith. Lee Strobel, the former award-winning legal editor of The Chicago Tribune, was an atheist who wanted to use his investigative skills to disprove faith in God. His research brought him to Christ, and today he is a profound explainer of Christianity.

Please do not believe what people claim about the Bible. Read it for yourself. And when you read it for all it’s worth, I pray you too will discover that “the law of the Lord is perfect, the instruction of the Lord is right, the commands of the Lord give light, and worshiping the Lord is sacred. All these are worth more than the finest gold and are sweeter than the sweetest honey” (Psalm 19).